Volunteers have always played a vital role in the work of the Forres Community Woodlands Trust by working to maintain the paths, the appearance of the woodlands and their bio-diversity.

To volunteer for either group contact the FCWT Secretary fcwt.secretary@gmail.com.  If you have any questions please ring Steve at 674275.

Risk Assessments are to be carried out prior to Volunteer Work commencing.  Points to consider for a Risk Assessment can be seen here.

Instructions for Volunteers who are Clearing Invasive Trees and Shrubs can be read here.

The volunteers efforts have recently been focused on clearing areas of non-native invasive sitka from Sanquhar Woods and attempting to stop damage by deer.  In Newforres woods they have been planting Rowan.

Volunteer work parties have resumed using carefully controlled work practices following the lifting of some Covid 19 restrictions.  In Newforres Wood, ten volunteers spent a warm sunny morning planting some forty native rowan trees in a clearing to the sound of robins, wrens and chiffchaffs. They also installed tree guards around some existing, naturally regenerating seedlings, cut back some of the gorse trying to regrow in the clearing, and removed old, redundant tree guards and stakes from other parts of the woods.

In Sanquhar Wood volunteers have been busy protecting young self-seeded tree saplings from deer damage by placing plastic spirals on the stems. The photos show the damage to rowan and oak but ash and holly have also been damaged. The damaged trees may recover if there is still an intact strip of cambium up the stem.

Encouraging Wild Flowers in the Coffin Field – May 2018

In early May 2018, a small group of Volunteers removed turf from parts of the Coffin Field to reduce the soil fertility before sowing wildflower seed.

The monthly volunteer work party spent a lovely sunny morning planting hawthorn and blackthorn in a rough cleared area near the entrance from Mannachie.  The young bushes were a gift from Bam Nuttall who recently completed the building and works to create the new Forres Railway Station.

The regular monthly work party of volunteers set out to remove some of the green tree protectors on the line of trees and bushes at the East side of the Coffin Field.  This is a trial to see if the deer subsequently damage those trees without protectors.  The removal of their tree protectors should enable the trees to strengthen and grow shoots at the lower levels.

In early January 2017, volunteers continued the ongoing programme to remove alien conifers to make space for oaks, hazels and other native species that will be planted at the end of the winter.

A small group of volunteers continued the on going programme of removing the non-native Sitka which have self seeded from Sanquhar Woods.  Their removal will allow native species to flourish as can be seen in the picture on the right.

Volunteers clear paths in the woods in 2016

The rapid growth of vegetation results in the pathways through the woods becoming overgrown.  Volunteers have been busy in Sanquhar, Muiry and Newforres Woods ensuring that the paths are kept clear for the many walkers and mountain bike riders who enjoy the woods.  The Brush Cutter is a great help in speeding up the task but in many places, it requires hand loppers and shears. 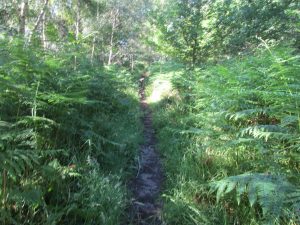 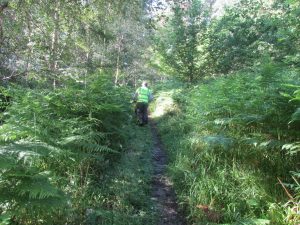 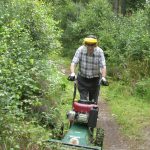 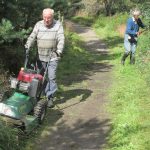 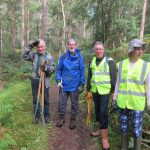 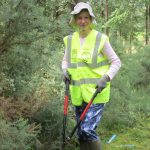 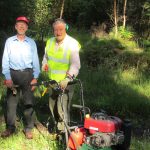 The felling of a band of trees in the Sanquahar Woodlands adjacent to the houses in Loch View and Woodside in early 2015 has left the area covered in brash.  Lower growing shrubs and trees will shortly be re-planted in the area.  A group of volunteers were out in early February 2016 to start the clearance work prior to the re-planting.  The cheerful group who achieved a great deal on a Saturday morning can be seen here. 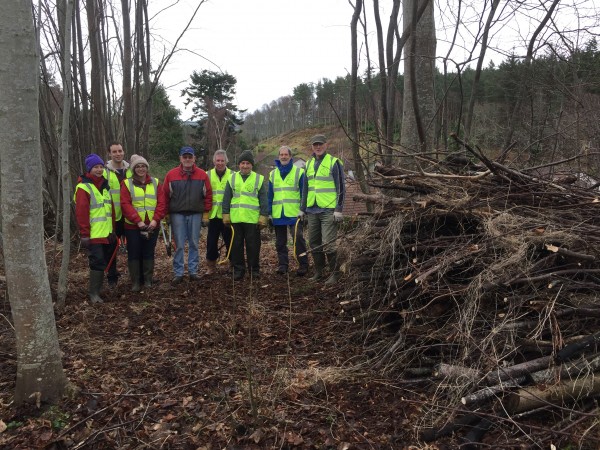 A small group of volunteers were out in mid May 2014 planting trees in the area beside the path to the South of the Coffin Field. These were native species and would enhance this corner of the woodlands. 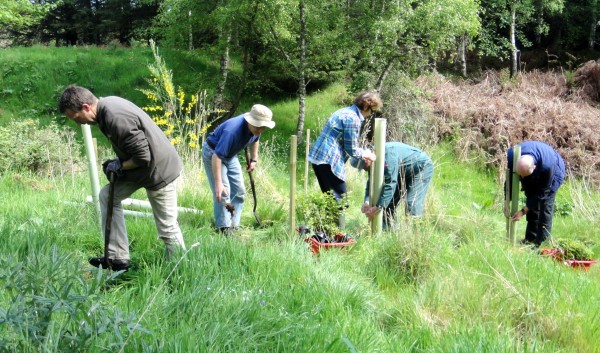 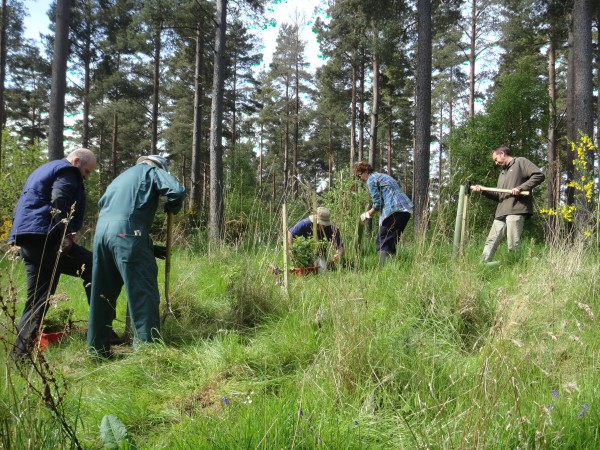 The result of volunteer’s work

Volunteers in autumn 2013 cleared away large patches of bracken that was growing near paths beside the coffin field.  This clearance has enabled bluebells to thrive in spring 2014 producing the lovely display seen here. 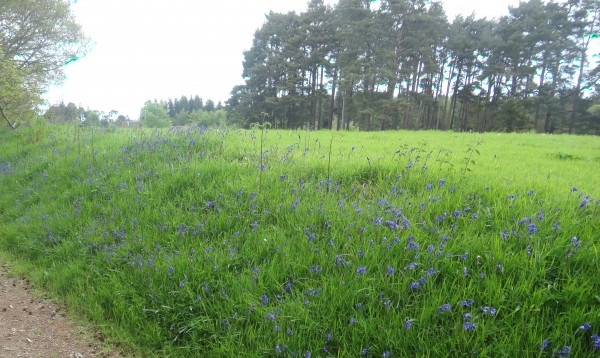 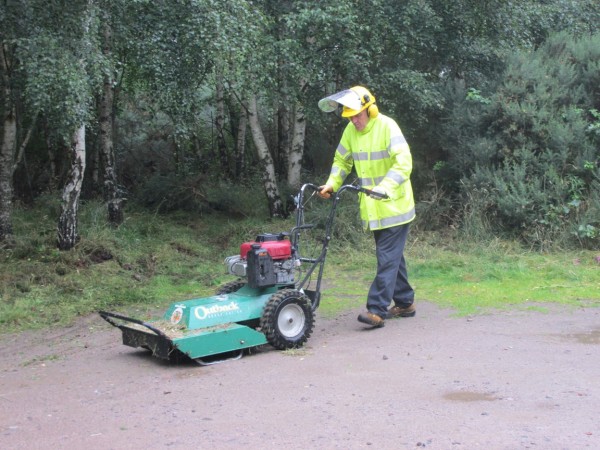 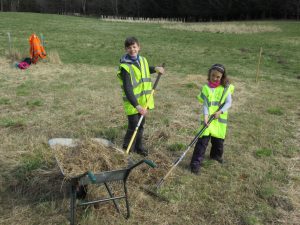 Volunteers, including the young ones seen here, have been helping to clear grass from certain areas of the Coffin Field to encourage growth of wild flowers and orchids as part of a long term programme to create a Wild Flower Meadow.

Pupils from Pilmuir Primary School P6 class helped to plant over 100 young saplings in the area known as the Coffin Field. They can be seen here with adult volunteers from the Trust who showed them how and where to plant the saplings.  The children will undoubtedly watch the saplings grow with great interest. 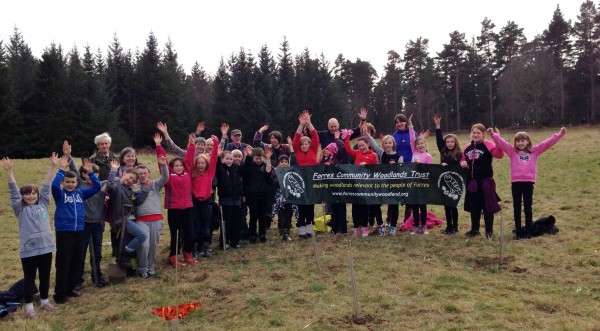 The photographs below show 2 groups of volunteers who helped clear areas of young sitka growing near to the Mannachie boundary of the woods.